Imagine a rock band wearing Kiss-influenced, luminescent masks, dressed in luminous clothing playing house classics from the 80’s and 90’s. Blend in the raw energy of rock and the hypnotic beats of dance music and then you have Wax – Real Time Orchestra. The ingenious idea of performing house classics with rock instruments was invented by Kärtsy Hatakka from the group Waltari and the DJ Jori Hulkkonen. The first version of Wax included musicians from bands such as Apocalyptica, Leningrad Cowboys, and a few members from the former group Ultra Bra. The band started out as a fun project but after a little while, and some changes in the line-up, the guys started to take things a bit more seriously. The British press soon caught their eye on them. “Why has nobody come up with this idea before?” the trendy publication, id wondered in their article covering Wax. 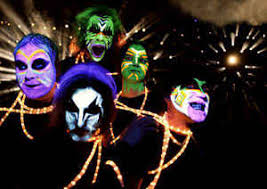 The idea of a rock band performing house classics combines two scenes, the people, and the music. What makes the gigs most interesting is the fusion of clubbers and the rock scene. Despite the fact that songs such as Small Town Boy, Killer, Good Life, and Music Sounds Better With You, are well recognized by the clubbers, the rock people are fairly unfamiliar with them. The stereotypical behaviour of rock audience vanishes, and some even go with the flow and dance.

Jori Hulkkonen is the brains behind the old-school repertoire that Wax performs live. So far Wax has performed as a live band in events such as Koneisto and the legendary Club Fabric in London, where the band is going back to perform this year. Clubbers have reacted to the rock versions of dance classics with great interest. This is no surprise, the five-member Helsinki-based group rocks like an organic army of synths. In addition to the music, the crowds are as fascinated by the incredible human light show as they take a trip back to the very essence of house music.